Gridiron- First Down by David Boop 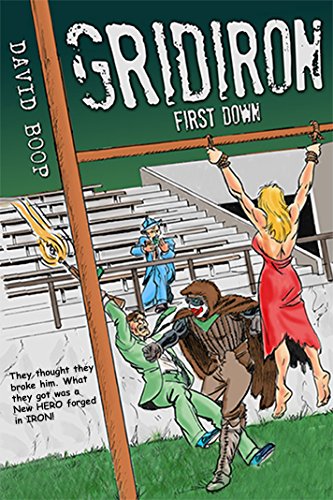 Tweet
Gordon “Gory” Burrell earned his linebacker nickname because he never quit until the other team tasted blood. It’s the late Thirties and professional football is a violent sport with few rules. When the Giordano crime family asks Gory to take a dive, they discover neither money nor threats mean as much as his reputation. They can’t have that, so the mob makes an example of Gordon – shattering his legs beyond repair. Unable to find justice, Gordon turns to a mysterious doctor who promises to help him walk again. However, the operation goes awry and he becomes something not quite human, something… impossible. Left with no choice, Gordon takes his rage and turns it against the ones who took everything from him; the Giordanos. He’ll leave his old life behind to start a new game where the goal is to smash the mob’s organization and the penalty for losing is death! More than a man, Gordon Burrell is vengeance forged in fire and pain. He is… GRIDIRON! "Gridiron – First Down" by David Boop (Green Hornet, the Black Bat.) Originally published in "Mystery Men and Women Volume 1" by Airship 27 Press. This is a newly edited version for eBook format.