She Murdered Me with Science by David Boop 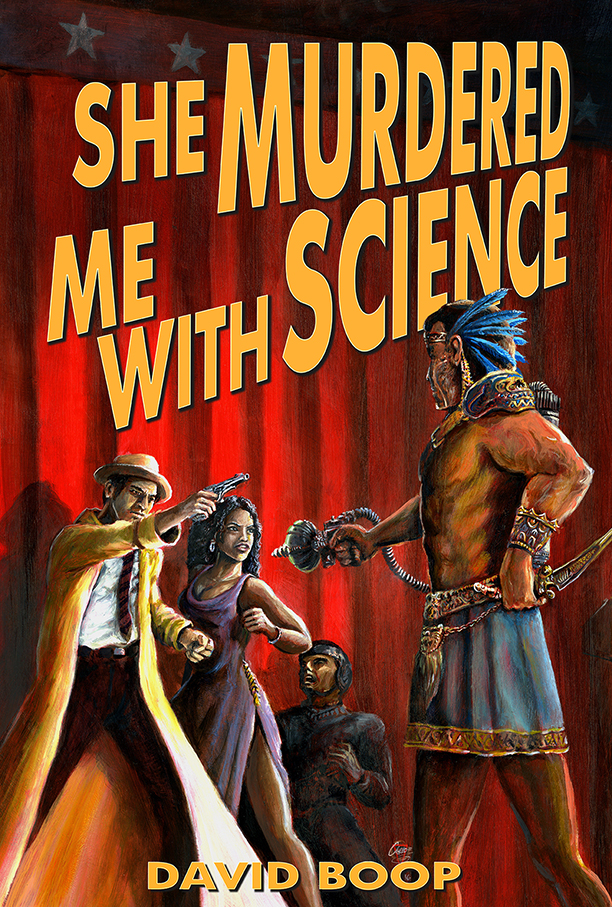 She Murdered Me with Science

“In She Murdered Me with Science, Dave Boop has created a wonderful, alternate-history thriller. Boop deftly weaves together influences like Phillip K. Dick and Raymond Chandler, marries them to the grand tradition pf pulp adventure stories, to produce a story that is a joy to read. He’s definitely an author to watch for in the future, and She Murdered Me with Science promises much for his career.” Mike Stackpole, New York Bestselling author of I, Jedi.

It’s 1953 and scientist-turned P.I. Noel Glass is tortured with the guilt of an early experiment gone awry. When a rich recluse offers proof that the accident was a set-up, Glass swears to clear his name. However, a clandestine organization is trying to conquer the world using his “failed” invention, but Glass stands in their way. Who can he trust when everyone has secrets? The songbird with a mean right hook? His Asian mobster best friend? Can Noel ignite his lost soul and face the one ghost he swore he laid to rest?

My name is Noel Glass. I once was a respected scientist and madly in love. All that ended in a splash of scarlet. I can never forget, and I will never forgive myself. It’s 1953 and I’m a shamus working the streets of Industry City. I don’t rely on instinct; science is my game. The cases I get, and the booze I drink, keep oblivion just a step away. That is, until some rich recluse walks in and tells me that accident from all this years ago was a set-up, a frame job, and I was meant to take the fall. Now I have to clear my name… like that’s easy. Everyone’s keeping secrets. Who can I trust? My neighbor, the mysteriously connected Wan Lee? Or the songbird Merlot Sterling? Her lies are almost as beautiful as her voice. Even the muscle-bound bodyguard I inherited can’t keep the hit men, spies — or my own government — from trying to put me six-feet under. You see, this secret organization believes I know something and wants to keep me quiet. All I do know is they’re aiming to remake the world into their own twisted image using a device I created. They’ve already axed one world leader, and Ike could be next. God, I could use a shot of bourbon and some answers, but neither comes cheap these days.