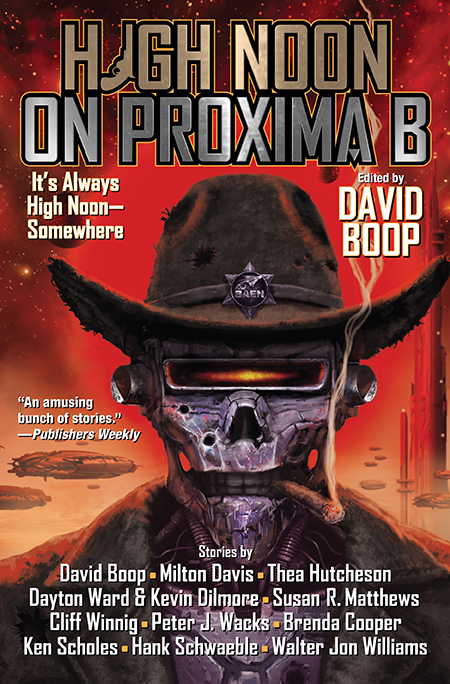 Preorder the Trade Paper of High Noon on Proxima b!

Coming Feb 7th, 2023! https://www.amazon.com/dp/1982192429/ref=cm_sw_em_r_mt_dp_B96M4XFQ9RM1QEG8Z1SS It’s always high noon on Proxima Centauri b. Original stories about the final frontier. YOU TELL ’EM THE SPACE COWPOKES A’COMIN’ AND HELL IS COMIN’ WITH ’EM! Adventure! Danger! Revenge! And a mail-order robot gunslinger in a wedding dress? Only in the wildest parts of space could this happen. It’s time again to get in your ramshackle rocket ship and journey to the universe’s western territories with this follow-up to Gunfight on Europa Station. Meet the employees of a space bordello as they’re drawn together to pull a con on a con. Or the crew filming a Western on a colony ship only to fight gravity and each other. Or a soldier on a backwater planet hiding from her past when it—and the military—finally tracks her down. Each voyage invokes the type of Western yarns you’ve loved before, but with a science fiction upgrade you’ll get to enjoy anew. Taking you on this ride are another set of astounding space opera authors such as Walter Jon Williams (Hardwired), Susan R. Matthews (Under Jurisdiction), Dayton Ward and Kevin Dilmore (Star Trek), Brenda Cooper (Project Earth), Milton Davis (Changa’s Safari), John E. Stith (Naught for Hire), and Peter J. Wacks (Caller of Lightning). Ten tales of the West . . . not as it was, but as it might be! 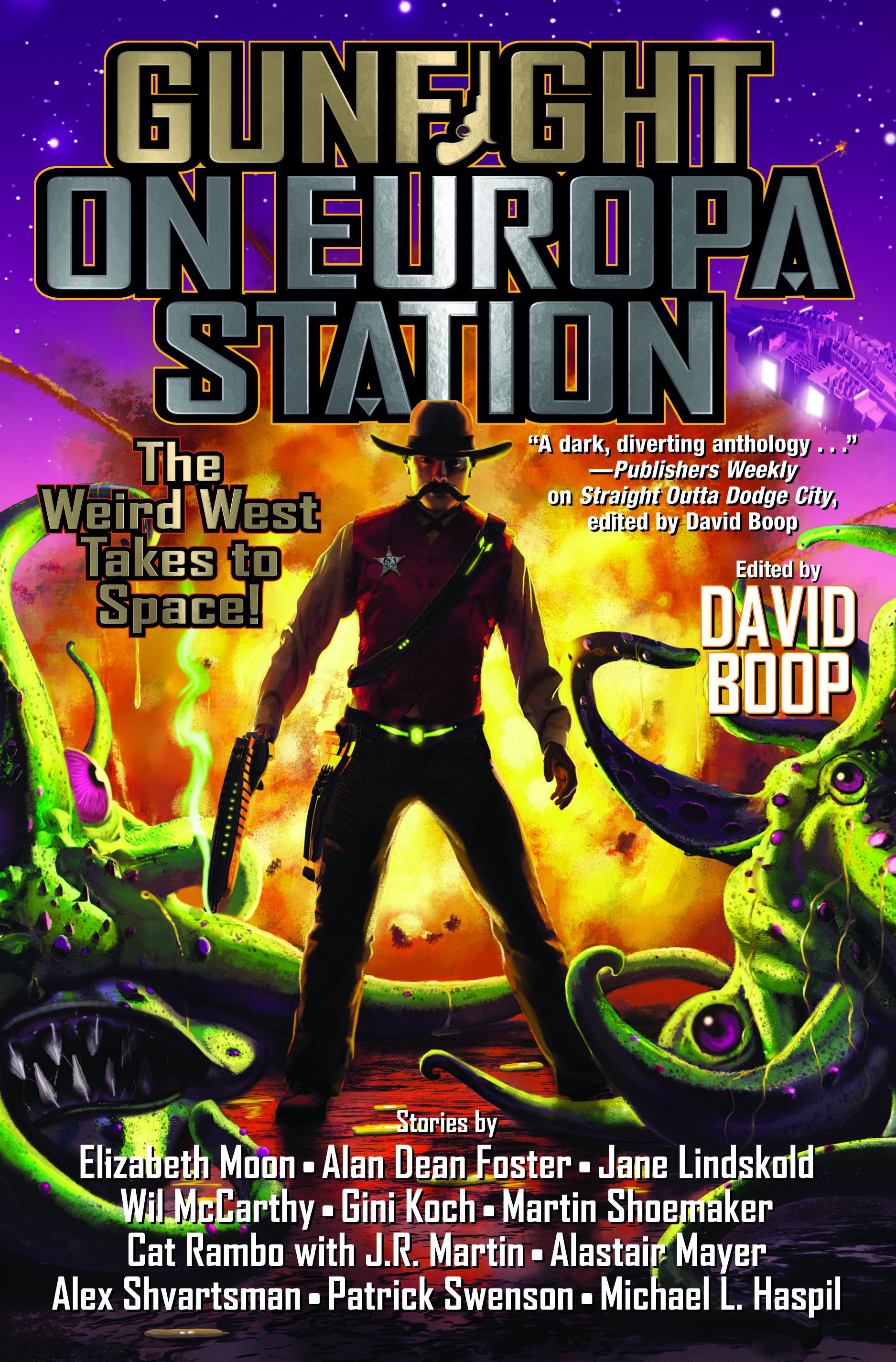 Preorder the Mass Market for Gunfight on Europa Station

Comes out October 25th, 2022! https://www.amazon.com/dp/1982192275/ref=cm_sw_em_r_mt_dp_B8NKHTBAMD712762M4CV ALL-NEW STORIES TAKE THE WILD, WILD WEST TO THE FINAL FRONTIER An actual wagon train to space? Gunslinging cowpokes riding in rickety rocket ships? What isn’t possible when you mix science fiction and Westerns? The final frontier ain’t so final in these 12 tales of space exploration and adventure: each a timeless yarn told around the warm glow of a nuclear reactor just before it goes supernova. There’s a story for everyone who’s ever dreamed of traveling the stars. From the lone stranger who flies into town to help a widow and her daughter to the alien rancher trying to pose as human, they are familiar, yet with completely new twists. Take the pair of mercenaries who sign on to stop a mining camp insurrection only to discover they might be on the wrong side of evolution, or the prospector who finds the strike of a lifetime but ends up stranded on a barren moon without hope of rescue. And if that’s not enough to catch your fancy, then how about a cloned Doc Holliday making his way in a future where both sickness and gambling are ancient history? Assembled inside are the biggest names in science fiction, taking you to the farthest reaches of the galaxy like they’ve never done before. Elizabeth Moon, Alan Dean Foster, Jane Lindskold, and Wil McCarthy are some of the exciting yarn-spinners inside. So get ready to hit the hyper-thrusters as you set course for adventure, mystery, romance, and two-lasergun slinging action! Featuring Elizabeth Moon, Alan Dean Foster, Jane Lindskold, Wil McCarthy, Gini Koch, Martin Shoemaker, Cat Rambo with J.R. Martin, Alastair Mayer, Alex Shvartsman, Patrick Swenson, and Michael F. Haspil. Edited by David Boop (Straight Outta Tombstone). 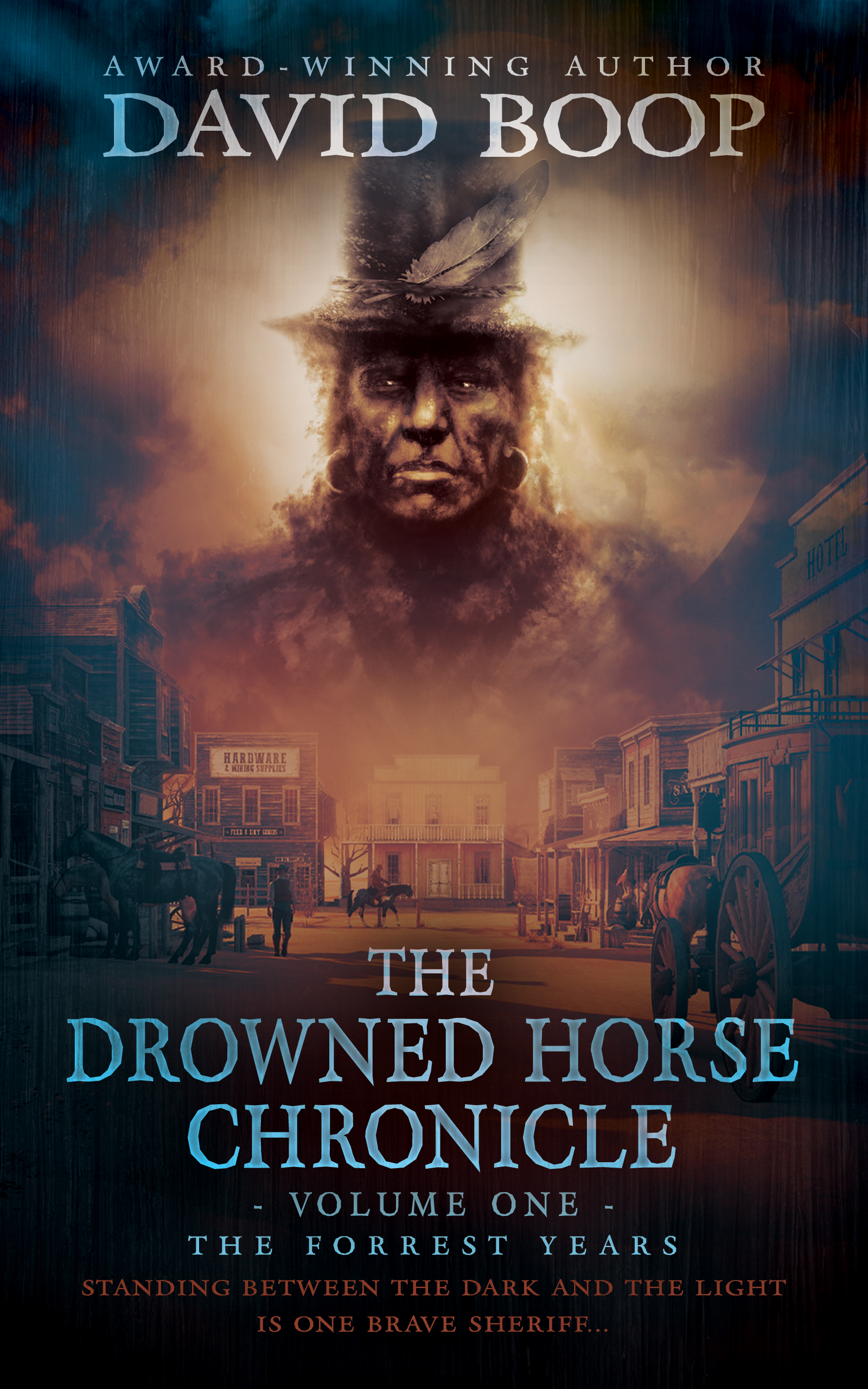 https://www.amazon.com/dp/B0B72DTV7R/ref=cm_sw_em_r_mt_dp_8ESE0XHJY6RMR7V6W7XA FOR IMMEDIATE RELEASE Contact: Terrence McCauley Email: terrence@wolfpackpublishing.com Tel: (917) 364-4895 Wolfpack Publishing Signs David Boop Author of Speculative Fiction Novels (LAS VEGAS, NV) –Wolfpack Publishing has acquired the rights to David Boop’s "The Drowned Horse Chronicle - Volume One: The Forrest Years.", a collection of ‘Weird Westerns’ tales as part of his ongoing Drowned Horse Chronicle series. Jake Bray closed the deal on behalf of Wolfpack. These stories will have an episodic narrative that unfolds as part of the Drowned Horse Chronicle saga, which will be set between 1864 and 1871 in the fictional town of Drowned Horse, AZ. It will be published in mid-2022 with two additional collections to follow in the future. David Boop is a Denver-based award-winning author and bestselling editor of several weird western anthologies starting with Straight Outta Tombstone. Previously, Boop has been an editor-in-chief, film critic, and journalist. Currently, Boop teaches creative writing and English part-time. He has been writing the Drowned Horse Chronicle since 2007. Mike Bray, President and CEO of Wolfpack Publishing, said, “Signing an author of David Boop’s talent demonstrates Wolfpack’s commitment to bringing our readers the best fiction on the market. I know his unique style will appeal to our customers.” David Boop said, “I'm blessed to be part of the Wolfpack family. I look forward to getting 'weird' with them. The Drowned Horse Chronicle has been waiting for the right home, and I feel Wolfpack is the perfect place to bring these stories together." About Wolfpack Publishing Founded in 2013, Wolfpack Publishing is an award-winning independent publishing company based in Las Vegas, Nevada. The company was named as one of the fastest-growing independent publishers of 2020 by Publisher’s Weekly and one of Inc. Magazine’s fastest-growing private companies in 2021. Wolfpack Publishing embraces the opportunities created by online bookstores and their limitless virtual bookshelves. The company is also expanding its presence in the paperback market through a distribution deal with Impact, a subsidiary of Ingram Publisher Service. The Wolfpack Publishing family of imprints include CKN Christian Publishing, Wise Wolf Books (teen/young-adult) and Rough Edges Press (mystery/crime/thrillers). Please visit www.wolfpackpublishing.com for more information.

I hate having to do this, but left with no choice 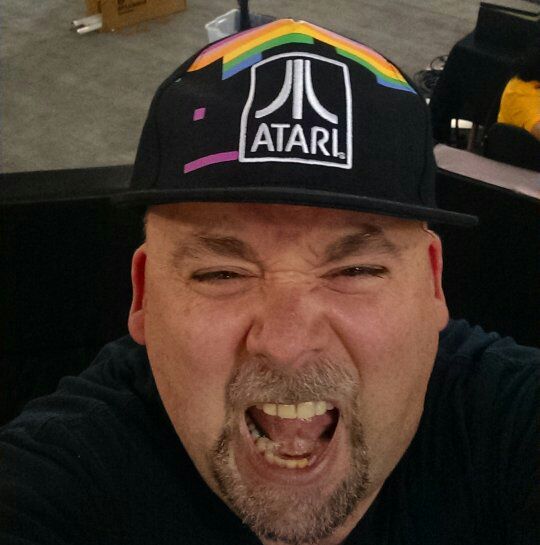 I'm am so sick of the finger-pointing and blame. From SFF, from American citizens. Isn't it past time we stop blaming the other side for our woes? For our fears? Both sides have them. Neither side is all the way right or wrong. What does it take to stop the madness? Seriously people. This isn't professional. This isn't the community I fought so hard to get into. You've buried people that have done you no harm on either side. SJWs/Puppies. Republicans/Democrats. Who has to die before you get your collective heads out of your hurt butts? Isn't that how so many stories end? Someone dies before both sides see how foolish they are. Who is it going to be? Who has to make the ultimate sacrifice before there is peace? We're writers. We've seen this plot before. Come together and face each other with understanding, love, compassion, or haven't we come far enough as a species for that? Everyone is scared. Everyone. If you're not scared, you're not paying attention. And if you think it's just going to work itself out, it's not. I love and respect people on both sides of this conflict and I refuse to chose one side or another. I love working with both and will continue to do so as long as I'm allowed to. As long as I have stories to tell I will, and I will do it in the most honest way I know how. Isn't that what we all want as creators? To reach the most people with our stories? We are doing the very things we used to abhor. Writing stories for select audiences. Marketing to select audiences. I refuse that notion. I write stories for everyone. If you don't read my stories, that's your choice. But they were written for YOU. Doesn't matter. M/F. POC/White. Hetero/LGTB. I write stories for everyone and I try to include everyone in them because we live in a world amazing people. Why is this so difficult a concept? Author shaming. Character shaming. Plot shaming. Let's stop. Just stop. 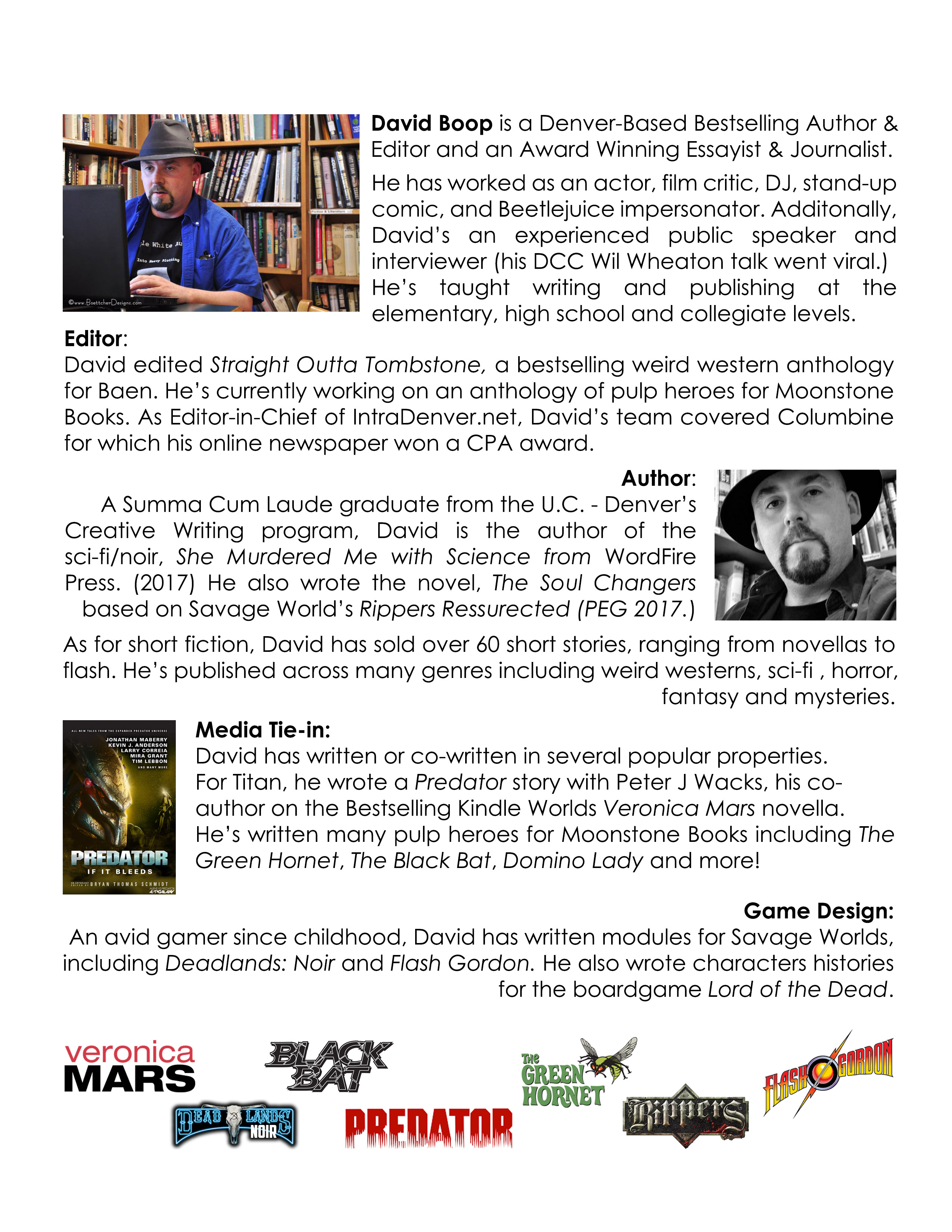 So, I'm pimping myself. But I think it's about time. I'm not getting any younger. LOL! Truth be told, I live sitting on panels, talking to classrooms, teaching what I know in an informal way. Here goes... I've been at this writing thing most of my live in various ways, but serious as a novelist since 2002. Since then, I've published a lot of short fiction, a couple of novels, a short film or two, and recently edited a national bestselling anthology. What does that mean for someone looking to book an author? It means I can talk about writing, publishing, dialog, plotting, unconventional narrative, specific genres, #thewriterslife, editing, publicity and marketing. I've spoken to schools from the elementary level to college. I've attended hundreds of conventions all over the country, given talks at libraries, bookstores and large writer's groups. With my journalism background, I can speak in front of cameras, microphones, or answer questions given as an email. I can do it all because I have done it all. I'm ready to work for you. Attached is my one sheet. Let me know if you have any questions. Dave 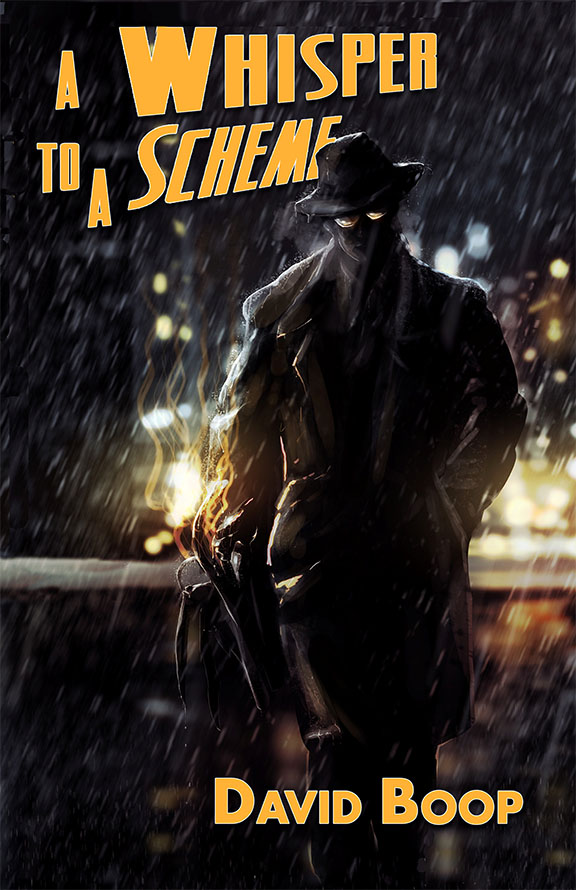 Prequel to "She Murdered Me with Science" Now Available!

My name is Noel R Glass and I’m not your average gumshoe. What I am is a pariah from the theoretical physics game; a former wunderkind who watched his future dissolve like the victims of my failed experiment. Years later, I’m finally putting my intellect to work solving crimes with science, not instinct. Well, mostly. Instinct told me the angelic damsel in a black dress who walked into my office was bad news. What made it worse is she admitted to possibly killing her husband, Millionaire Mercantile Maverick Marlin Black. Now I have to find Mr. Black, or his corpse, before the cops do. Otherwise, they won’t look beyond the bedroom eyes of his gorgeous widow. But I know different. It’s not just a hunch, but the science of the bullet that took down Black doesn’t add up. I’m on the run to find a rifle that kills without making a sound. Even my genius brain might need help on this one. Who can I turn to? Certainly not the Widow Black or any of Marlin’s associates. They’ve all got motives. No. The type of assistance I need comes in the form of a Japanese gangster with a Chinese Name. But if Wan Lee helps me, what will he ask for in exchange? Damn those dames singing the “Save Me” blues. Why aren’t I smart enough to just walk away? "A Whisper to a Scheme" now available through Amazon.com.